Ever heard of Buffalo, Wyoming?

If you love the great outdoors, you'll love Buffalo.

Check out our latest article at:
http://wyominginmotion.com/buffalo-wyoming-ticket-to-the-wild-west/

Wyoming in Motion is a travel webzine that covers Wyoming and the states that border it - Montana, South Dakota, Nebraska, Colorado, Utah and Idaho. Our motto: You...are...there!

Posted by Barbara Peterson at 5:53 AM No comments:

Theme nights on board the cruise: http://www.startrekthecruise.com/theme-nights/

Mirror-Mirror
Welcome to Star Trek: The Cruise Mirror Universe… An alternate reality in which good is bad and bad is good. There are no ion storms to monkey with the transporters on the Norwegian Jade, but we may still find ourselves crossing over to the “other side”. Tonight we visit the darkest parallel timeline, where the uniforms look different, as does the facial hair. It's going to get weird, wild and wicked, but hopefully our crew will get us back to our timeline without a visit to the Agony Booth.

Captain Sulu’s Soiree Captain Sulu invites officers and crewmembers from all species to boldly go where no one has gone before. It was a tradition on the USS Excelsior and we're bringing it to the Norwegian Jade: Captain Sulu's Soirée. This celebration will unite civilizations across the galaxy in an incredible festive night. We will proudly wear our Starfleet finest (or more Earth-bound formal attire) and enjoy a gala worthy of our august Captain.

Q’s Costume Party
The pan-galactic prankster is back, and ready for more hijinks and horseplay. Q, who has appeared to us as everything from a Franciscan monk, an interstellar judge, a 16th century sea captain and an Aldebaran serpent, is the only choice to host this year’s costume party! Prepare your most elaborate, outrageous and imaginative outfit, as the competition shall be wilder than a Nausicaan on payday.

Risa’s Festival Of The Moon Party
After visiting our newest Pleasure Planet (and private port of call) Harvest Caye, we continue with the relaxed vibe in our summery apparel for the evening festivities. Under the star-filled sky, we’ll feast on a delicious Targ-B-Q, dance, drink and groove to Risan rhythms in the warm balmy weather. Keep your eyes peeled for a Horga'hn, too.

Holodeck to the Holo-Disco
The Norwegian Jade's Holodeck comes pre-loaded with one of the most outrageous programs imaginable: Sol 3 in the 1970s! Step through those doors and be transported to a world of platform shoes, bellbottom pants, big hair, as well as great quantities of sequins and glitter. But it's still the Star Trek Cruise's 1970s, so a fusion of space, sequins and Spock ears will be all the rage at the Star Trek Disco Inferno!
Posted by Barbara Peterson at 5:51 AM No comments:

If you are a "travvie" (that's hashtag travvie!) - you love to travel and see new sights and sounds and have new experiences, and you're interested in the Rocky Mountain region - Wyoming, Montana. South Dakota, Nebraska, Colorado, Utah and Idaho, then check out the Wyoming in Motion webzine.

Here are the latest articles published:

Behind the Scenes - the writing of the tourist booklets for the NPS National Historic Trails Auto Tour Routes
http://wyominginmotion.com/behind-the-scenes-national-historic-trails-auto-tour-routes/


and very much needed right now, since Cheyenne Frontier Days starts in just another couple of days:


Posted by Barbara Peterson at 7:04 PM No comments:

Here's the trailer for the 13th Doctor, as played by Jodi Whittaker.

Jodi Whittaker, according to Wikipedia, was born on 3 June 1982. She first came to prominence for her 2006 feature film debut Venus, for which she received British Independent Film Award and Satellite Award nominations. She was later praised for her roles in the cult science fiction film Attack the Block (2011), the Black Mirror episode "The Entire History of You" (2011), and as grieving mother Beth Latimer in Chris Chibnall's acclaimed TV series Broadchurch (2013–2017). On 16 July 2017, it was announced that Whittaker would become the Thirteenth (and first female) main incarnation of The Doctor in the popular TV series Doctor Who, taking over the role in the 2017 Christmas special episode "The Doctors".[1] Her arrival in the series will coincide with Chibnall's, who will become Doctor Who's new showrunner.

Posted by Barbara Peterson at 2:49 PM No comments:

No surprise - a woman has been cast as the 13th Doctor

Jodi Whittaker is a brave woman to take on such an iconic role. 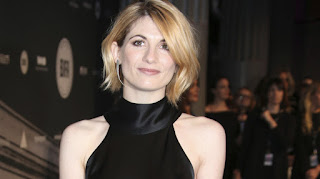 I personally disagree with the choice - the Doctor is not a woman.

It will be interesting to see how the Doctor's personality changes with a "feminine" persona.

Will she be as rude and as overbearing as the Doctor quite often was?

Or will her character be "softened" and "feminized."

Even today, strong women are treated differently than strong men.

Men have a commanding presence and get things done, women are naggers, etc.

If looking back at 50 years of the Doctor, if a woman had been playing the role at any time, would the men he had been "bullying" if you like have put up with that from a woman?


Posted by Barbara Peterson at 10:55 AM No comments:

Each cruise starts at the port of Miami Florida, spends a day at sea, then stops at Roatan, Honduras, Harvest Caye, Belize, Costa Maya, Mexico, then a da at sea and back to Miami.

Scheduled to attend, in alphabetical order, are:

Posted by Barbara Peterson at 7:52 AM No comments:

Daily Space is a "general" science fiction and fantasy blog.

I've started a new blog, called, "Consider the Doctor," that will deal specifically with Doctor Who.

Other things in the works  - stay tuned!
Posted by Barbara Peterson at 8:45 AM No comments:

It's been a while since I've posted here, but I'll be posting here quite a bit from now on as I've also resurrected my science fiction and fantasy webzine The Thunder Child.

Oh, the archives have always been available at thethunderchild.com, but I haven't added new content for a while.

I'm quite proud of what I accomplished with The Thunder Child many years ago, but there's no denying that it is primitive today from a design standpoint, and hopefully within a few months I'll have it all moved to a new platform.

A couple of months ago I covered StarFest Denver 2017.

And here's an interview with Tom Kiesche. You may not recognize the name but you'll probably recognize the face. In addition to being an actor he's also a playwright, writer, and singer.

Posted by Barbara Peterson at 6:58 AM No comments: