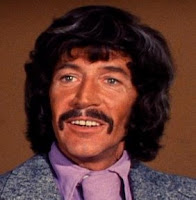 I've been assembling a collection of my favorite TV shows from the 70s..now that they're gradually becoming available as used DVDs... (I'm too cheap to pay full price for them).

So today is Jason King day.

And I've go to say they're a bit of a disappointment. Mainly because I really can't stand "big hair" on a guy, let alone a Fu Manchu moustache, and that's what Peter Wyngarde has in this. In two Avengers episodes and a Saint, he was clean shaven and drop dead sexy, but in this...he just doesn't do it for me ... (Yes, he's gay, but a guy can still ooze sex appeal to a straight woman for all that.)

I don't think I ever saw Jason King, lo these many years ago... actually what I saw was a show called Department S, in which he's one of three secret agents. In Jason King, he's a writer, who keeps getting involved in international crimes and such, much like Roger Moore's Simon Templar.

But the scripts, the camera angles, I don't like them that much...


And for those of you who can play Non-USA-playable DVDs:

Posted by Barbara Peterson at 6:11 PM No comments:

You have to see it to believe it.

Posted by Barbara Peterson at 4:13 PM No comments:

My headline rant of the month

Each time today that I've gone to Yahoo to check my mail, I keep seeing the following headline:


Now, Donda West is the mother of a rapper, named Kanye West. She recently died after complications from her plastic surgery, and she and her son have been much in the news as a result.

Just looking at that headline, doesn't it make you think that the arrest warrant is for Donda West's surgeon because of what happened to Donda West?

And doesn't the term "tossed" imply that the arrest warrant was proper, but legal finagling got it dismmissed? Much in the way that an earlier headline used the word "quashed" instead of "tossed," but which implies the same thing.

It is only if you actually read the article that you find out that the arrest warrant is for a civil case, completely unrelated to the Donda West death (such that if this guy hadn't had a high-profile patient die on him, this arrest warrant stuff wouldn't even be news).

In addition, the warrant was not "quashed" or "tossed." The guy missed the first court date, resulting in the warrant, but then he went to court and got the misunderstanding about his non-appearance sorted out, and so the warrant was simply "dropped" or rendered unnecessary.

I wonder, how many people now think that Donda West's surgeon (anyone even know his name?) is facing, or should face, criminal charges over Donda West's death?

I'm not saying that that won't come - I haven't kept track of any of the articles about this tragedy, frankly, and only read this one because I wanted to see if an arrest warrant was really "quashed" or "tossed" (you see, they know how to get people to read their articles...even when they're bogus), but it hasn't come yet and that headline is irresponsible.
Posted by Barbara Peterson at 3:46 PM No comments:

I haven't been able to work on The Thunder Child for the last week or so, as my real world job got in the way...

I finished that yesterday and have been decompressing ever since. Also my new betta died last night, and I'm a bit depressed about that, and then there's all the stuff going on in the world today, and looking at the US politicians, and their records over the course of 200 years, not to mention the records of politicians around the world...I think the world is doomed...

Then, I read this article about a NYC eatery called Serendipity 3, closed down after it failed its second health inspection in a month:

People stand in line for hours outside the Manhattan restaurant, known for its extravagant and expensive desserts. Its $25,000 Frrrozen Haute Chocolate features top-grade cocoa, edible gold and shavings of a luxury truffle and was declared the most expensive dessert in the world by Guinness World Records. The eatery also offers a $1,000 sundae named Golden Opulence requiring 48-hour advance notice.

So loons pay $25,000 for a Frrozen Haute Chocolate, and $1,000 for a sundae named Golden Opulence...and the owners of this place can't keep out cockroaches and mice???? What is wrong with this picture????
Posted by Barbara Peterson at 2:47 PM No comments:

Manhunt 2 should have a Sick rating attached to it. Sick in the formerly accepted sense of that word:
There's a game out now called Manhunt 2, in which the character playing the game gets to torture other people. There was a big brouhaha over what rating it should get, Mature or X, and Mature won. Well, all I can say is the people who could even think of creating this game are sick, the people who want to play the game are sick, and it is to be hoped that parents will show some discipline and prevent their kids from playing the game...and if they do see someone playing the game, it would be best to make a note of that and not let them near any guns or sharp objects in real life.

Will it then be hypocritical of me to say that freedom of speech is being attacked again in the cause of author Anne Enright? [I don't think so. One is trying to prevent a psychotic game from being unleashed on the public, much like the n-word is trying to be prevented from being unleashed ever again, the other is a woman expressing her *dislike* of a couple of people!]

Anne Enright Dislikes the McCanns
Anne Enright received an award for one of her books, and is now threatened with losing her job because she dared to say in an essay that she disliked the McCanns (whose 3 year old daughter Madeleine has disappeared.)

The article's in the New York Times. The author of the piece said:

The essay was about Madeleine McCann, who was 3 years old when she disappeared this spring in Portugal. In the essay Ms. Enright tried to work through a cacophony of complicated emotions toward the girl’s parents, including reluctant voyeurism, distaste and pity. But newspapers here and in Britain picked out a sentence in which Ms. Enright said that she “disliked the McCanns earlier than most people” and ignored what she wrote afterward: that she was ashamed of the impulse and, in the end, rejected it.

The people calling for her head are saying: Her publishers should have put a large brown bag over her head immediately,” Janet Street-Porter wrote in The Independent on Sunday, in a typical comment. “I urge you not to buy Enright’s book until she apologizes for this slur.”

What "slur?" She dislikes the people, that's her opinion, she's entitled to it and to say it. It's not like she called them by the N-word, or the F-word, or the B-word. She simply said she disliked them. And it was an essay, not a factual report on the events, so there again, this is ridiculous.


Congratulations on the Book Award, and Welcome to the Scrutiny

And, of course, instead of standing up for herself, Enright is hurriedly apologizing that she didn't mean to hurt anyone's feelings, and she's sorry if she did so. I do so wish people who've done nothing wrong would stop letting themselves be put on the defensive like this, and stand up for themselves. But, of course, unlike game companies, she doesn't have millions of dollars to use in her defense should some judge allow the McCann's to sue her for defamation of character...despite the fact that, again, all she said was she didn't like them! Lots of people don't! 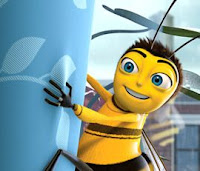 I went to see Bee Movie yesterday, starring Jerry Seinfeld. I don't mind admitting that the only things I knew about bees before yesterday were that there was a queen bee, they made honey, if they stung you they'd die, and that honey bees in the US are dying out for some reason - and if they do...life as we know it is over because they're the ones who pollinate the flowers and cause things to grow!

So, Bee Movie was okay...sort of a take off on frivolous law suits, kinda boring, with some funny jokes. When Barry the Bee was given his flight jacket at the end of the movie, I found myself hoping that they would market that jacket, as it looked really cool, all black and yellow...

But then I went home, spent five minutes with a children's book on bees, and discovered that Seinfeld and his other writers had missed the boat big time.

In the movie, the bee society is a male dominated one, and it runs perfectly. The only female bee we see who has a speaking role is Seinfeld's mother. Jerry's character Barry doesn't want to work for the rest of his life in one job, he wants to be a "pollen jock" - a bee that goes out into the big wide world and gets the pollen and nectar to bring back to the hive.

And these pollen jocks are real macho, male bees with the flying jackets, helmets and goggles of fighter pilots from WWII. Cool.

In reality, a beehive is ruled by one queen bee. There are thousands of worker bees, who are FEMALE. It is the female bees who are the pollen jockettes, flying out into the world. They're also the ones who stay at home and clean up the hive, feed the Queen, etc.

And what do the MALES do? (Of which there only hundreds, not thousands.) Nothing. Their job is to service the queen so she can lay eggs, nothing more. Otherwise they just hang around doing nothing.

Now, imagine what Seinfeld's movie should have been like, if he and his writers hadn't been concerned with presenting what they considered to be the perfect society - one run by men.

Barry graduates from bee school...but this time he has no exciting job waiting for him, because he's just a male. He gets to spend the rest of his life hoping the queen will pick him to do the um...you know. (I'm sure Seinfeld could have come up with a joke to make that clear to the adults without letting the young kids know exactly what's being talked about.)

So he's hanging around, stuck in the kitchen as it were, while all the females get to do the fun jobs - cleaning, making honey, going out of the hive to pollenate plants and bring back plants and nectar, and he envies them their freedom.

So one day he decides to go out with these pollen jockettes, who allow him to do so...

And the rest of the movie can go on from there with little changes, except of course a female actress would be the one voicing the pollen jockette's leader, and the three characters who sort of take Barry under their wing to start with are voiced by women instead of men...and at the very end when the pollen jockettes save the day by holding up the plane, it's the females who are doing it...

That's the way it should have been, if any slight attempt at accuracy was to have been made. But much like the male cows with udders in last year's ridiculous Barnyard, film creators see the world their way, the patriarchal way, and that's the way they're going to present it.

But I think my version would have been better...

Well, well, well, three rants in one post. Pretty good.
Posted by Barbara Peterson at 8:22 AM No comments: