I created a very brief tribute to Patrick Barlow - it's just 30 seconds of a few photos, but with some funny audio from his radio program Desmond Olivier Dingle's Complete Life and Works of William Shakespeare.

Americans probably don't know who Barlow is, although his play The 39 Steps is running on Broadway in a limited engagement right now, and anyone who watched Absolutely Fabulous saw him as Max in a couple of episodes, and he was part of the company of French and Saunders. He's been in a lot of stuff.

Basically I'm just procrastinating...I've got a lot of work to do on The Thunder Child but I've got a headache and dont' feel like doing anything where I've got to think....
Posted by Barbara Peterson at 11:47 AM No comments:

Gearing up for baseball

I have a website for the Boston Red Sox phenom Jacoby Ellsbury, and a small site for Ichiro Suzuki, and I thought I'd share the URL here.

Please check it out.
Posted by Barbara Peterson at 9:27 PM No comments:

This photo is of a hot air balloon in the shape of Darth Vader.

If you're in Brussels, check it out: http://www.starwars-theexhibition.com/brussels.html 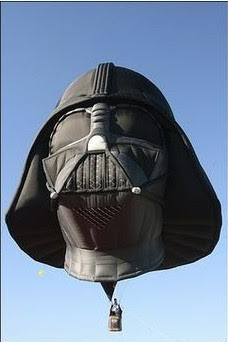 Posted by Barbara Peterson at 11:14 AM No comments:

I went to the Model Train show at the Hampton Roads Convention Center today - the last of its two day appearance. And it was fun - lots of model trains running around on tracks, lots of stuff being sold...if I had the space and/or the discretionary funds I would have picked up a few things...unfortunately, I lack both!

The recent Writer's Strike, which cost a lot of people a lot of money and ended up accomplishing very little, is so in everyone's minds now, that I thought I'd share this little rant (and it is a rant!) from Harlan Ellison, for an upcoming documentary called Dreams with Sharp Teeth. (It's not a reaction to the strike, by the way, but rather having an interview with him on a DVD of Babylon Five.

And he wants to be paid for giving this interview. And I'm like... no. If you write a script for something, you should be paid, but what is an interview except you answering questions? Sure - high up politicians expect a gazillion dollars for their interviews, but actors and writers...? Who are supposed to be promoting their work anyway?

Still... listen for yourself.

Posted by Barbara Peterson at 7:15 AM 2 comments:

I've just turned off Rush Limbaugh, because what he's just said has made me so angry that if I were anywhere near him I'd give him such a slap!

"The level of racism in the delegates or the super-delegates is going to determine who gets the nomination, Obama or Hilary."

That's his categorical statement - it's all going to come down to racism. Forget the fact that if Obama were not black, he wouldn't even be in the position he's in. THat's not racist on my part, by the way, that's just a fact. Name one presidential candidate in modern times who has ever gotten as far as Obama with NO experience. None.

So, the delegate's could very well decide their nomination simply on experience - Obama doesn't have any. Granted, Hilary Clinton doesn't have much more, but she did spend 8 years in the White House with Clinton.

But to state categorically that "racism" is what will cost Obama the nomination, that's just despicable.

Because, when it comes to the general election, if Obama is defeated by McCain, that just opens the door for people to say, well McCain only won because all of the country is racist.

For myself, I gotta tell you that I'm not impressed by any candidate of any party. I think the time for a single president is over, frankly. There simply is too much going on for one man, or one woman, to keep track of it all and make good decisions about everything. We should have one president for domestic issues, and another for international issues. When those two conflict - for example opening the borders to Mexico allowing gazillions of unemployable people into the US to batten on our welfare system...then.... well, I dont' know who should make the ultimate decision about that. Okay - so I dont' have it all worked out yet!

But it sure isn't working the way we have it now. The Democrats hate the Republicans and vice versa, and nothing ever gets done because of it.

(That's another interesting little insight into Limbaugh. A few months ago he was ridiculing the Democrats who had taken over in the Senate - Pelosi et al, because they werent' getting anything done. They "can't" get anything done, Limbaugh was saying, because they're incompetent.

He's changed his tune now, though, because he's talking about Republican John McCain going into the White House. He'll be able to get things done, because he's on the Democrat side. He'll work with the Democrats. In other words, it wasnt the incompetence of the Democrats such as Pelosi that hasn't allowed them to accomplish anything, but rather the fact that Republicans block them at every turn.

If the Democrats get a majority in the House and Senate in the next election - well, then they'll be able to get things done.

And vice versa if it's the Republicans who get in (except McCain is pretty much a Democrat, anyway...)

Anyway, I certainly don't know how to solve the world's problems. The easiest solution would be for a bunch of highly educated atheists to build a space ship, take off, settle on Mars or somewhere and form a new government based on humanistic ideals, but if that ever happens it'll be too late to save the current generation of humanity...
Posted by Barbara Peterson at 11:09 AM No comments:

A new species of duck-billed dinosaur unearthed in Mexico is helping scientists fill in gaps in the fossil record of the Age of Dinosaurs.

The creature, dubbed Velafrons coahuilensis, was a massive plant-eater belonging to a larger group of duck-billed dinosaurs called hadrosaurs.

A few months ago I was watching one of those history channels, where they show documentaries of various "weird" things. One told a story of a young boy, about 14 or so (happened a long time ago) who claimed to have been attacked by a giant bird and lifted off the ground, before being dropped. His mother claimed to have see n it as well.

Well, I reserved judgement on it, but then I saw this video of some kind of raptor attacking a deer, and if that raptor had been after a human being...it would've been lights out!

Posted by Barbara Peterson at 9:07 PM No comments:

The Curse of Fatal Death

For some reason, only pt 2 of this Doctor Who spoof is on YouTube.

The humor is a bit too "earthy" for me...but give it a look.

Posted by Barbara Peterson at 10:38 PM No comments:

This Video from Youtube has been online for 2 years now and has over a million hits, presumably because everyone wants to see the last 3 minutes of it, which features a skateboarding dog named Tyson.

Also on offer are some funny kittens, a hopping penguin, a polar bear (can't quite figure out if he's really tired or just lost the use of his front arms...)

Posted by Barbara Peterson at 10:51 PM No comments:

There's an old truism that people live up to the level of their income. In the United States, the richest country in the world, more than half of the people live "from paycheck to paycheck." If they get laid off, they have no savings to fall back on. (After all, why should they? It's the government's job to help them out, isn't it? And the fact that the government gets the money to do this from us, the taxpayers... so it's we taxpayers who are helping these deadbeats out...all because they couldn't be bothered to save money for emergencies....)

Okay...too soon into my rant.

The point is this. An archivist at the New York State Libary, who made $70,000 a year, has steadiliy been stealing historic documents from that institution and selling them on Ebay.

"I took things on an as-needed basis to pay family bills, such as house renovations, car bills, tuition and my daughter's credit card problem," Lorello wrote.

He said he took many items last year because his daughter "unexpectedly ran up a $10,000 credit card bill."

Well...gee...you don't think your daughter could have returned whatever it was she bought for $10,000 to lessen her debt a bit? Or got a second job so she could pay off her own bill?

But this is one thing I don't understand about the article. According to the quote above - he stole all this stuff. He says so.

Lorello, an archives and records management specialist in the New York Department of Education, pleaded not guilty Monday to charges of grand larceny, criminal possession of stolen property and scheme to defraud and was released on his recognizance. He faces up to 25 years in prison if convicted.

Why is he pleading "not guilty" when he's already admitted he took the stuff?

Here's how this will probably play out. He'll plead mental illness...the stress of his life in the education system was just too much for him...he needs understanding, not prison time.

Frankly, I doubt if he'll spend a day in prison...it's a "victimless" crime. Indeed, although he'll probably lose his job you can bet he won't lose his pension....
Posted by Barbara Peterson at 1:54 PM No comments: