Dante Basco: 29 August 1975, Pittsburg, California
Of Filipino descent, Basco had a supporting role as Rufio in the 1990 film Hook, and has done voices for The Last Airbender animated TV series.


Michael Dunn (born 20 October 1934, Shattuck, Oklahoma, USA, died Aug 29, 1973, London, England, UK)
The 3' 11" Dunn, born Gary Neil Miller, was a concert pianist until a condition called chondrodystrophy destroyed his career, when he turned to acting. Had a supporting role in the "Plato's Stepchildren" episode of Star Trek, and had a recurring role as Miguelito Loveless in Wild, Wild West.

Posted by Barbara Peterson at 3:20 PM No comments:

Jack Black was born on this day in Hermosa Beach, California in 1969.
His SF work consists of playing Carl Denham in Peter Allen's King Kong (2005), and Billy Glenn Norris in Mars Attacks! (1996) He was also the voice of Po in Kung Fu Panda.
Posted by Barbara Peterson at 1:33 PM 1 comment:

August 27 events in SF and Fantasy 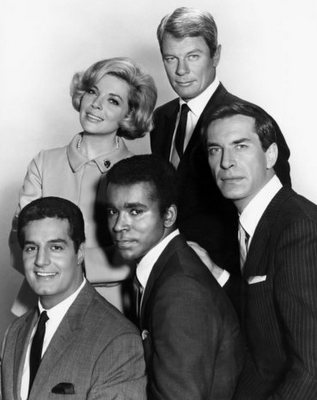 Born on this day:

Paul Reubens (1952, Peekskill, New York, USA)
PeeWee Herman, had a cameo role as the Penguin's father in Batman Returns (1992), the sequel with Michael Keaton reprising his role as Bruce Wayne, and a supporting role in Mystery Men (1999), among others.

Peter Stormare (1953, Arbrå, Gävleborgs län, Sweden)
Perhaps most famous as the "Punk your auto" German engineer in the VW commercials, and as the silent killer in Fargo, he played Satan in Constantine, the President in The Imaginarium of Doctor Parnassus, and Lev Andropov in Armageddon (1998).

Died on this day:
Greg Morris: born Sept 27, 1933, died Aug 27, 1996 of lung cancer. Most famous as the electronics wizard Barney Collier in the original Mission: Impossible.


Posted by Barbara Peterson at 6:07 PM No comments: 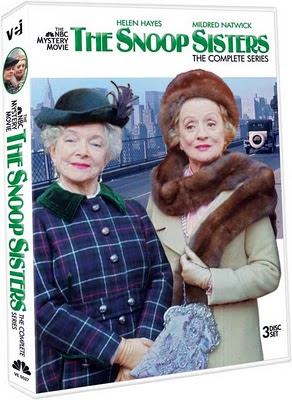 The Snoop Sisters - The Complete Series, with Helen Hayes and Mildred Natwick,on DVD Next Year!

I hate having to wait to 2011 for this, but I'm glad its coming out. I've long wanted to have this.
Posted by Barbara Peterson at 9:49 AM No comments:

Wandered through my local Walmart today,and saw that they'd moved some Disney DVDs to the front of the store and were only charging $6 for them, so I picked up James Mason's 20,000 Leagues Under the Sea and Hayley Mills' In Search of the Castaways.

I'll be sharing screencaps in due course.

20,000 Leagues has always had a bittersweet place in my heart. I saw it when I was about 13 or 14 years old or so, decades afer it was made. It was in a real theater - back then films were re-released to movie theaters, rather than on to TV..and I thought it was a first run movie and I got such a crush on James Mason.

So, a year later, 11 Harrowhouse comes out, and I see by the poster that it has James Mason in it...so I went to see it and got the shock of my life. He was so old! How could he have aged 20 years in 1 year...old and balding and plump...I was just stunned.

Of course he still had that magnificent voice.

But it does make me think every now and then...thank heavens for movies and TV. If all the world had to remember actors by was the theatre... well, they wouldn't be remembered.
Posted by Barbara Peterson at 9:23 PM No comments:

Earlier today I saw that Mexico was due to play Germany at noon. So I tune in, expecting to see Mexican boys and German boys playing baseball.

Not so. The Mexican team is full of Mexicans, but the Germans? They are all Americans from Ramstein AFB. Don't call them Germans, call them Ramsteins.

Yesterday, the Saudia Arabians also turned out to be American kids. So again, they aren't "Saudi Arabia", they should be called "American kids from Saudi."

I don't begrudge American kids overseas the opportunity to play baseball and get into the World Series, but I'd rather see the actual kids of the country playing baseball.

To call American kids by the term "Germany" or "Saudi Arabia" is misleading and ridiculous.
Posted by Barbara Peterson at 9:22 AM No comments:

I'm packing up to move halfway across the country, out to Cheyenne Wyoming.

I've just emptied out my closet and come across a box of my short stories and other writings, that I haven't seen for 10 years.

I also found about half of a book I'd written called The Rock, The Vulture and the Chain. Another one that I'd forgotten about.

So, once I get to Cheyenne and get settled in, I've got a lot of typing to do so that I can self-publish these books on Kindle!

At least...I hope so. I won't re-read them until I get to Cheyenne...hopefully they'll be, if not good, at least salvageable.

Since I'll be coming to them after a period of 10 years, I'll be like a reader coming to a new story for the first time. I should be able to judge it fairly - is it any good, or does it stink?

But I was quite pleased to find these. I want to get into the self-publishing arena, and having two books already written is going to speed up that process no end!
Posted by Barbara Peterson at 10:03 AM No comments: