This Android game mashes up geolocation and science fiction

From the Washington Post:  This Android game mashes up geolocation and science fiction

In a million places around the globe, a strange form of energy is coming through from what seems like another dimension. We don’t know anything about it — only that it appears to make some people more creative and intelligent. Those people are called The Enlightened, and their goal is to blow those portals wide open. But working against them are the members of The Resistance, people who believe this new energy can’t be trusted.
That’s the lore behind Ingress, an emerging augmented-reality game from Niantic Labs, a startup within Google. The portals are real-world landmarks and points of interest that fall under the control of either in-game faction when nearby players power them up. The idea is to get people out and exploring parts of their own city they may never have been to before, said John Hanke, who oversees the game’s development.
“We wrapped it in a science fiction game that borrows from the spirit of J.J. Abrams,” said Hanke. “There’s a little bit of World of Warcraft in that it’s a massively multiplayer game and everybody is in the same environment, and it’s a little bit like geocaching in that it involves visiting real world locations.”
Depending on your attitude toward technology, you might find yourself gravitating toward either The Enlightened or The Resistance. Hanke insists otherwise, but it’s striking as a kind of metaphor for our shifting conversation about tech and how it might be transforming us. You’ve got, on the one hand, tech skeptics who think society is being eroded by what we haven’t fully grasped. Then on the other hand you’ve got enthusiasts who think embracing new advances could yield vast benefits. It’s ironic that by getting people outside and joining with others in huge meet-ups to play the game, the simulation itself is an argument for the latter.
Hundreds of people descended on Washington last weekend for one such meet-up on the Mall, to “bring the Capitol under alien influence.” It’s part of a worldwide series of events for Ingress players — other participating cities include Boston, Chicago, Tokyo and Dusseldorf.
The game is still in closed beta and for Android phones only.

Posted by Barbara Peterson at 8:01 AM No comments:

Peter Capaldi is the new Doctor Who

Here's the video of the announcement and a bit of an interview with Peter Capaldi, the new Doctor Who.

Quite a big deal was made of who Matt Smith's successor would be - doubtless because this year is the 50th anniversary of the show.

25 years ago, I was at the Chicago Hyatt for the 25th anniversary, in which all the surviving Doctors were there...I got the autographs of Tom Baker, Patrick Troughton and Jon Pertwee...it was up to Colin Baker at that time...

Posted by Barbara Peterson at 7:07 AM No comments:

The Labyrinth Makers, the first in the near-science fiction series The Coldest Equations, by Caroline Miniscule, is now available in expanded form on the Kindle, Nook, and various other e-readers via Smashwords. 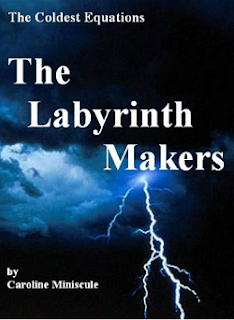 In the year 2050, civilian space corporations race against each other to build manned space stations on the moon, on the asteroids and on other planets. Each corporation has spies which they send out to acquire technology from other corporations, and counter-intelligence teams to prevent such spying.

Miranda Rainbird and her espionage team from the Capablanca Corporation are tasked with acquiring widowed scientist Craig Valdemar from the Philidor Corporation, based in Canberra, Australia. Three years ago he'd been a highly-touted new PhD and the creator of AC Fission, which was to revolutionize space travel. His wife has just died when he goes to work for Philidor.

Unbeknownst to the Capablanca Corporation, Valdemar has been a bust. But, when he meets Miranda Rainbird (in her guise as journalist Marguerite Zelle, he suddenly begins to produce again (because she resembles his deceased wife). And Philidor's counter-espionage agent Charlie De Wolf is given his instructions - Marguerite Zelle must never leave Canberra.

And here are the links to purchase it.
Amazon Kindle:
http://www.amazon.com/The-Coldest-Equations-Labyrinth-ebook/dp/B005DIXEMK/ref=sr_1_1?s=digital-text&ie=UTF8&qid=1375567994&sr=1-1&keywords=The+labyrinth+makers

Smashwords - for various other e-readers
http://www.smashwords.com/books/view/341348

Posted by Barbara Peterson at 3:21 PM No comments:

HOUSTON (AP) — When the smoke cleared and the music died down, Candy Torres could no longer contain herself. Looking at the shiny, restored Star Trek Galileo shuttlecraft sitting in Houston in all its TV glory, she broke down.
"All of a sudden I was just crying. I was in tears. I couldn't believe it," Torres said, donning a brown tourist engineer hat and a NASA mission operations shirt. "It meant something."
And Torres wasn't alone. Trekkies of all stripes arrived in Houston Wednesday for the momentous unveiling of the shuttlecraft that crash-landed on a hostile planet in the 1967 "Star Trek" episode called "The Galileo Seven." Some wore Scotty's Repair Shop T-shirts, others full-blown spandex outfits worn by Mr. Spock and his peers in the famous TV show and movies that have garnered a following so large and so devoted it is almost cult-like.
Adam Schneider paid $61,000 for the battered shuttlecraft in an auction and spent about a year restoring the fiberglass ship and making it look nearly as it did on that episode. He flew in from New York to mark the unveiling at the Space Center Houston, where it will be permanently displayed not far from NASA's Mission Control.
"Unbelievably proud," he said, beaming alongside the white shuttle. "Like sending your kid to college and having them get a job to build a successful life, because this was under our care for a year and we grew very attached.
Jeff Langston, 45, drove more than 160 miles from Austin with his two sons to see the moment. He and his 12-year-old son, Pearce, wore matching red Scotty's Repair Shop T-shirts. His 10-year-old son, Neo, couldn't find his shirt, but that didn't put a damper on the moment.

"It was very exciting," Neo said, bouncing on his feet. "When they filmed Star Trek the Galileo was cool and now that they remade it, it's cool to see a new version of the Galileo. And it's beautiful."
Richard Allen, the space center's 63-year-old CEO and president, hopes that just as the Star Trek movies and others like it inspired Torres to pursue a career in science and engineering, that today's generation will be similarly inspired when they see the Galileo.
"It's fantastic," he said of the shuttlecraft. "We're all about exciting and educating ... and I'm convinced that space is one of the best, if not the best, way of creating inquiry in young minds."

Posted by Barbara Peterson at 7:22 AM No comments: