PR: Koldcast ads the web series Haywire to is line up 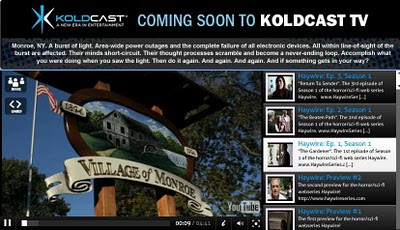 Monroe, NY, January 28, 2011 – The horror/sci-fi web series Haywire is set to join the line-up of KoldCast TV, one of the world’s top destinations for original web-based programming. The collaboration will introduce Koldcast’s ever-growing international audience representing over 200 countries to the world of Haywire.

In addition to viewing episodes on the Koldcast website (www.Koldcast.tv), Haywire’s growing fan base will soon be able to enjoy the series in full HD on their televisions through any of Koldcast’s apps offered on the likes of Boxee and Roku. With the expanse of the Koldcast network, more viewers than ever will get a taste of the emerging series.

"Haywire is a twisted, gruesome suburban nightmare” offered Koldcast VP of Network Programming Marti Resteghini. “Not only is it a great horror series but a clever satire as well."

ABOUT HAYWIRE
Haywire is a horror/sci-fi web series produced by Lights Out Film Group (www.lightsoutfilmgroup.com). The series focuses on the effects of a strange light on the suburban town of Monroe, New York. 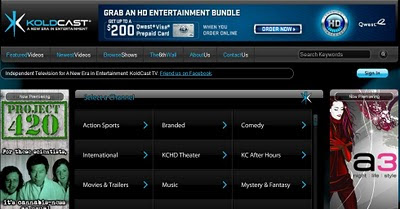 Posted by Barbara Peterson at 8:21 PM No comments:

Jon Pertwee in The Curious Case of Santa Claus, pt 1

Posted by Barbara Peterson at 5:36 PM No comments:

One Step Beyond: Wesley Lau in Mask

From the I Like Television website. A young Wesley Lau (most famous as Andy Andeson on Perry Mason), plays a pilot who parachutes into the desert of Egypt. Then, strange things start to happen.)

Posted by Barbara Peterson at 12:04 AM No comments:

The Making of the Creature from the Black Lagoon


Posted by Barbara Peterson at 9:25 PM No comments:

Three episodes are now available at Youtube, with new eps added on a monthly basis. The film company, Lights Out, is located in New York, and is looking for storefronts to film in front of or houses to film in. If you'd like to be a part of filmmaking history, give 'em a call! (And especially do so if you want to try out your acting chops.)

http://haywireseries.com/?page_id=42
Haywire is the saga of the effects of a strange phenomenon on the population of the small Hudson Valley town of Monroe, New York. It's horror and sci-fi with a nice peppering of drama, comedy and action for your viewing pleasure.
"Monroe, New York. A burst of light. Area-wide power outages and the complete failure of all electronic devices. All within line of sight of the burst are affected. Their thought processes scramble and become a never-ending loop. Accomplish what you were doing when you saw the light. Then do it again. And again. And if something gets in your way?"

Posted by Barbara Peterson at 5:48 PM No comments: