The People Out There: NCIS SF Fan Fiction

THE PEOPLE OUT THERE

I've written some fan fiction for The Avengers and for NCIS. The NCIS material is science fiction related, and so I thought I'd start a section at The Thunder Child for it.

The People Out There, and its sequel, In The Dark, are on-going serials that tell the story of what happens whe the people out there, in the dark, decide to manipulate the world of television and the real world for their own entertainment.

Within a week, original fiction will also start appearing at The Thunder Child science fiction webzine.
Posted by Barbara Peterson at 4:45 PM No comments:

William Shatner was on Conan O'Brien yesterday, and recited Palin's resignation speech as a poem. The audience laughed and laughed.

I'm not a fan of Sarah Palin's, but I don't think she deserved to be mocked in this way. How about doing a skit on Hilary Clinton pretending to be strafed by aircraft in Bosnia? Or Obama using his teleprompters and looking like a metronome? Or Biden and all his gaffes?

And, of course, Shatner is famous for his delivery. Ever heard The Transformed Man? It is pure Shatner!

And Leonard Nimoy released an album as well:

And they are both compiled in:

(Check this one out. You can download MP3s of individual songs, including "Spock's Thoughts" which is Desiderata, and Shatner's Lucy in the Sky with Diamonds.
Posted by Barbara Peterson at 8:52 AM No comments:

I'm actually puzzled to see Bovey's Voice of God being aired... I thought they were doing Cold Blood!

http://thethunderchild.com/RadioDrama/BBC7/SimonBovey/SimonBovey.html
Posted by Barbara Peterson at 7:48 AM No comments:

Voyage to the Bottom of the Sea

Just uploaded a new article to The Thunder Child. Here's the URL.

http://thethunderchild.comTelevision/1960s/VoyageBottomSea/VTTBOTS.html
Voyage to the Bottom of the Sea made its debut a year before Star Trek, and lasted a year longer than Star Trek did.

Just as Star Trek still has its fan base decades later, so does VTTBOTS, as you'll see in this article. The show starred Richard Basehart as Admiral Nelson, David Hedison as Captain Crane, and a handful of other actors who rounded out the bridge crew.

Below is a video of Pendercraft's Flying Sub (a craft that made its debut in the 2nd season) - radio controlled.

Posted by Barbara Peterson at 5:35 PM No comments: 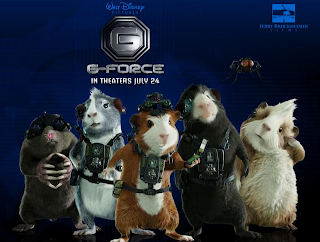 I had intended to see Up today.... (I'm behind in my movie viewing in the last month or so), but for various and sundry reasons ended up seeing G-Force instead. And I enjoyed it. I hadn't expected much of it, but really, it was quite entertaining.


The premise is that a secret department of the FBI has been testing animals to see if they can communicate, as well as spy for the United States. The FBI has been attempting for two years to find out what a certain billionaire named Saber is up to.

The head of the secret department, Ben, sends in the G-Force in an unauthorized mission to see what they can find out. The G-Force consists of two male guinea pigs, a female, a fly, and a mole. The G-Force succeeds in downloading information from Saber's computer, but when the "real" FBI comes to the department, the information is not of the right program. The FBI shuts down the program....and the G-Force is to be destroyed.

While Saber's machinations continue, the G-Force struggles to prove they deserve to be part of the FBI. And they've only got 30 hours to do it.

Bill Nighy plays Saber. In one part of a speech he's giving, he flings his head back reminiscent of Davy Jones from Pirate of the Caribbean, but for the most part he gives a restrained performance (for some reason with an Australian accent).

The humans don't get much to do, but do well with what they do have. There's no over-acting here, everyone is taking their role seriously. Unfortunately, Kelli Garner as Marci, Ben's partner, has even less to do than any of the other humans...she seems to be just put in there as the token woman.

As for the guinea pigs, Darwin is played by Sam Rockwell, Juarez by Penelope Cruz, Tracy Morgan is Blaster, and I did not know this until I just looked at the credits, Nicolas Cage was the mole, Speckles!

It's a film for kids and adults. Adults will recognize a few homages to secret agent films. Blaster and Jaurez scuba dive into Saber's yard. Jaurez comes out shaking her fur reminiscent of Ursula Andress in Dr. No (and of course Austin Powers in Austin Powers: International Man of Mystery.) Fortuately Jaurez doesn't wear a white bikini.

A fun movie, and of course a life lesson - which I won't spoil by revealing it now. I just wonder if kids will want to buy guinea pigs now, and expect them to be able to talk!
Posted by Barbara Peterson at 11:52 AM 1 comment:


Believe it or not, I've yet to see this movie. I was on travel and just never found the time.

Since it's "Alternate Universe" I don't mind the changes they've made, but it's just too bad they couldn't just write a real prologue to Star Trek.

Even more then Enterprise, a show I didn't care for, I would have liked to have seen a show that shows how the starships were actually built, how the Star Academies were formed, and stuff like that. That's the kind of stuff we need to see now so that people realize how much work we have to do to make those fiction shows come true!
Posted by Barbara Peterson at 7:40 AM No comments:

Machiminima has loaded a few of its interviews at YouTube, and I share them here as well:

We had a chance to talk with comic book visionary Stan Lee about Marvel Ultimate Alliance 2 at the Activision Comic-Con party.

Posted by Barbara Peterson at 11:46 AM No comments:

Here's the extremely popular wedding video that has been making the rounds lately.

Everybody, from ushers to maids of honor to bride and groom, come through the door and down the aisle dancing. It is pretty cool. The song being sung is Forever.

Posted by Barbara Peterson at 7:21 PM No comments:

You can still listen to all the episodes of Jefferson 37.

You can also listen to Part 1 of Simon Bovey's Cold Heart.

http://www.bbc.co.uk/programmes/b007jv38
Posted by Barbara Peterson at 4:22 PM No comments:

Kindle Book: How To Make Money By Blogging

That's the title of my new Kindle offering.


In it, I detail how to set up a blog using blogger.com software, and how to monetize the blog with Google Adsense, Amazon.com, Ebay, and Clickbank.

I also have created a new blog especially for the book (and subsequent entries in the Miniscule Guides series:

Now, you're not going to get rich by blogging, unless you're some in-the-know guy like Perez Hilton who gets thousands of hits a day. But by being patient, and diligently filling out your blog on a daily basis for about three months, you will start to see the income trickle in.

Enough at any rate to be able to afford a few DVDs, a few games, some twelve packs of Pepsi.

Find the right niche, and hope for the economy to get better, and the sky could be the limit.
Posted by Barbara Peterson at 3:22 PM 1 comment:

Getting back in the swing of things

I've been on travel for hte last few months, and haven't updated this blog as often as I should have done.

Now that I'm home, I'll be able to update it on a daily basis.

Except...not much to report today.

You can still listen to Part 1 of Jefferson 37, a chilling story of what happens when clones are made to serve as spare-part banks for the original person.

1/4. Marketing expert Eleanor visits Abbottsville, where clones are made for human spare parts.

http://www.bbc.co.uk/radio7/programmes/schedules
Posted by Barbara Peterson at 6:46 AM No comments:

What happens when clones are made to provide body parts - like eyes - for the wealthy?

http://www.bbc.co.uk/radio7/programmes/schedules
Posted by Barbara Peterson at 6:21 PM No comments:

The Gibson on BBC Radio 7

At the time I'm posting this, you still have 17 hours to listen to the first episode of The Gibson.

Go to the link below, then scroll down to the nighttime link, which is still active. Pay no attention to the times listed on the page, just click on the episode link and it will start playing immediately.

All the other parts are online now as well.

What is The Gibson?

1/6. An aspiring poet gets drawn into a web of dark and mysterious forces.

2/6. After Saul and his family win a competition, strange events happen.

3/6. Haensel warns Elise, Saul is summoned by Selwyn - and mystery in Roman Bath.

4/6. Saul learns the truth about the sinister Gibson room and cavers push too deep.

5/6. Saul and Elise make a disturbing discovery in the nursing home. With Robert Glenister.

6/6. On the day of the festival, Saul and the Guardians prepare to fight. With Robert Glenister
Posted by Barbara Peterson at 5:23 PM No comments:

The Canonization of Michael Jackson

Ever since Michael Jackson died, the media blitz has been ridiculous. I walked past a newsstand at Target yesterday and there were four magazines devoted to him. Times and Newsweek each had him on the cover. And there were a couple of tribute issues.

And fans are in tears and pouring into bankrupt California to a memorial for him...

And yet where were these fans when he was alive, eh? Nowhere. Now he's dead and all of a sudden he's back on top as the "King of Pop."

It's just ridiculous. I don't watch the news reports, but apparently they are breakig down the fans of Jackson into Democrats and Republicans (Dems liked him, Republicans didnn't) old and young, etc. Then of course there was that special on BET a few days ago where some guy said, "MIchael Jackson belonged to us (African-Americans) and we just loaned him to you." And Jackson's identity issues (the nose job, the bleaching of the skin) were all caused by whites. And the pedophilia, et al, that was just white man trying to take him down, just like they "took down Cassius Clay."

(Presumably that refers to the fact that Clay was drafted to go to Vietnam, refused, and went to prison for a year or two instead. Frankly, I sympathise with the guy! But I don't think they picked on him deliberately... after all, Elvis Presley was drafted, too! (Course not in war time.)

Anyway, I remember liking Michael Jackson and the Jackson Five when I was a kid, and when they were there natural selves. Then he did the nose thing, and the skin bleach thing, and got all weird. As for the pedophilia...don't know about that. I never followed the case, but apparently the parents deliberately put their kid into that situation so they could get money out of Jackson..and I seem to remember they lost that lawsuit...

Then of course there's all the vultures gathering. Jackson is deeply in debt, but his estate is supposed to be worth million --- lawyers are scenting their fortunes being made here.

But what's more obscene that that is that there were actually paparazzi using telephoto lenses to get photos of Jackson inside the ambulance with an oxygen mask over his mouth. And this pic was published! Why does anybody need to see that? Only sick people would want to see that.
Posted by Barbara Peterson at 11:04 AM No comments: