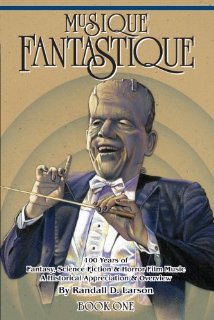 Creature Features published  the wholly rewritten, revised and expanded 2nd edition of Musique Fantastique: 100 Years of Fantasy, Science Fiction & Horror Film Music by noted film music writer, Randall D. Larson. The first book (of four separate books) that make up the new edition was released in September as a limited edition trade paperback and an ebook. The remaining three volumes will be released later in 2013.

When it was published in 1985 by Scarecrow Press, Randall D. Larson’s Musique Fantastique: A Survey of Film Music in the Fantastic Cinema was the first book-length analytical commentary of these genres of film music. Out of print, elusive, and sought after for many years, Musique Fantastique has been regarded as a unique and important reference work for students and enthusiasts of both film music and fantastic films.

The first extensive analysis of music in science fiction, fantasy an horror films, Larson’s exhaustive commentary covered the use and techniques of music in these genre films from the silent era and the groundbreaking Golden Age of the 30s, and 40s, through the rise of electronics and the resurgence of symphonic film music in the late 70s and early 80s. Taking the approach that film music has an especially unique responsibility in these genre films and has achieved significant advances in musical style and form in these genres, Larson examined in detail how music has been used to intensify the film-going experience in these types of movies.

In this 2nd edition, Randall has significantly expanded his in-depth coverage of the subject, from the silent era through the summer blockbusters of 2012. Featuring a new introduction by film composer Christopher Young, Musique Fantastique, 2nd edition, is a massive, four-book comprehensive examination of music for fantasy, sci-fi, and horror films and television worldwide.

Author Larson said, “The explosion in genre product in cinema and television over the last two decades has demanded an extension of my original discussion to see where film music in these genres has gone since 1985. I’ve also got a much better opportunity to write about these films, having written about film music for more than a quarter century. I’m not a musicologist and you won’t find a lot of discussion about musical theory and technique in Musique Fantastique II. What you will find is analysis about music’s dramatic function and purpose and what has been and remains unique about music for sci-fi, fantasy, and horror films.

Posted by Barbara Peterson at 8:12 PM No comments: