Wesley Snipes Could Have Been Geordi LeForge! 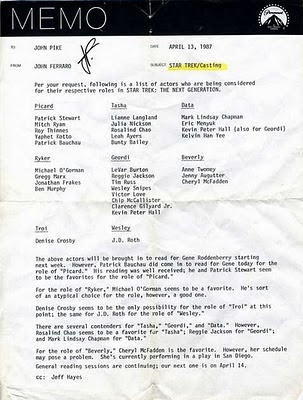 This is a blog entry from the Letters of Note blog.

Star Trek casting
It could have been so different. From the archives of Paramount we have a memo - written in April of 1987 to the studio's Head of Network TV - detailing the acting talent then being considered for various roles in Star Trek: The Next Generation; a programme that would begin to grace the small screen just five months later. A few observations: at this juncture, Patrick Stewart was already a favourite for Picard, alongside Patrick Bauchau; Brent Spiner wasn't even being considered for the role he eventually took, as Data; a young man by the name of Wesley Snipes was in the running for the part of Geordi, a role ultimately filled by LeVar Burton but seemingly close to being taken by Reggie Jackson; Jenny Agutter at least read for the part of Beverly, and there was, as of yet, no sign of a certain Wil Wheaton, the youngster who eventually played her son, Wesley Crusher.

Per your request, following is a list of actors who are being considered for their respective roles in STAR TREK: THE NEXT GENERATION.

For the role of "Ryker," Michael O'Gorman seems to be a favorite. He's sort of an atypical choice for the role, however, a good one.

There are several contenders for "Tasha," "Geordi," and "Data." However, Rosalind Chao seems to be a favorite for "Tasha"; Reggie Jackson for "Geordi"; and Mark Lindsay Chapman for "Data."

For the role of "Beverly," Cheryl McFadden is the favorite. However, her schedule may pose a problem. She's currently performing in a play in San Diego.

General reading sessions are continuing; our next one is on April 14.